If you are looking for a refrigerated vehicle then Glacier Vehicles is the company to help you. The long history of the company has been productive, and we now have key strategic relationships with major commercial van makers, and refrigeration conversion experts and installation engineers, meaning we can offer you the best prices in the market.

A new way to buy your refrigerated vehicle in Staffordshire

Glacier Vehicles wants to provide you with a comprehensive, added-value service, and not just to sell you a vehicle The approach involves understanding your business, and the operational requirements of your transportation fleet, so that we can provide the best vehicle to meet your daily requirements; at a great price. The focus with Glacier Vehicles is creating a long-term relationship with you so that you come back in the future whenever you have refrigerated vehicle requirements. When you work with a refrigerated company that understands the need to deliver tailored solutions, like Glacier Vehicles, you give your business a good shot at major success

Why you should choose Glacier transportation vans in Staffordshire

Are you searching for a nearly new refrigerated van in Staffordshire? Our refrigerated van dealership is the leading light in the used fridge van marketplace. Each fleet of refrigerated vans requires a different type of temperature controlled van, and the diversity in the marketplace is vast. Your operational requirements will be unique, and therefore you need a unique vehicle solution. It’s vital that you choose your fleet after doing significant due diligence. refrigerated vehicle experts in Staffordshire ready to help you Very few companies can beat the 20 years of experience the Glacier Vehicles has of producing quality reports and providing the right vehicles to businesses. Working with a company such as Glacier Vehicles guarantees that you make the right decision when choosing a refrigerated van for your business. By understanding your business and understanding your processes Glacier Vehicles ensures that you get everything you need. The consequences of making the wrong decision with your van can be very expensive. Don’t allow your business to be at the mercy of less experienced professionals, work with a trusted company today.

You’ll be hard pressed to find a refrigerated vehicle company with a better reputation for service, quality and value than Glacier Vehicles. The sales consultants at Glacier can help you over the phone, or in person, and can pinpoint exactly what you need in a conversion or existing model. Your van conversion will be geared to ensuring that the van ends up a great fit for your business. Glacier is more than happy to demonstrate vehicles so you can get a good idea of what will work. Glacier Vehicles ensures that every vehicle arrives at the customer door in perfect condition, HPI checked and fully performance tested. 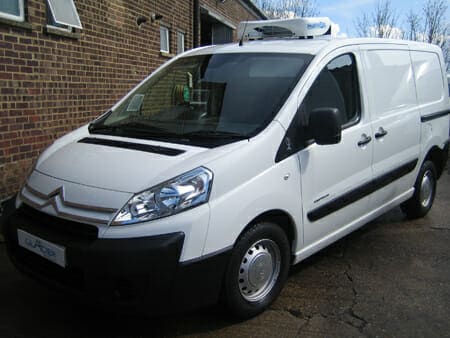 The best refrigerated vehicles in Staffordshire

With just about every different manufacturer of refrigerated van available we provide you with more choice. Our brand list includes Vauxhall, Nissan, Peugeot, Volkswagen, Iveco, Renault, Mercedes, Toyota, Fiat, Citroen and Ford refrigerated transportation vehicles. We also give you plenty of choice within different manufacturers with more than 20 vehicles from Mercedes, Volkswagen and Ford normally on our showroom floor. With so much variety it can be confusing knowing which van is right for you, so we work with you to ensure that you understand the different features and benefits and get the right vehicle. With decades of experience our teams are here, ready to help you get the right refrigerated vehicle for your needs.

It isn’t always easy to find a refrigerated van to fit your budget. We have vehicles in different price brackets from less than £5000 up to over £25,000. With finance arrangements available you can build the payments into your monthly expenses rather than having to pay a lump sum upfront.

By providing superb service we ensure that our customers come back to us the next time they need a refrigerated van. Our business is progressive and we are always striving to offer the best possible service. If you want to find out more about how our customers have rated our service then take a look at our testimonials. Very few companies have the positive testimonials that we have, and we are sure that they will provide you with some peace of mind, and confidence in our refrigerated transportation service. Contact Glacier Vehicles for a discussion about how our refrigerated vans in Staffordshire, or the bespoke conversion service can meet your needs.