Whatever the operational requirements for your business Glacier Vehicles has a refrigerated vehicle to meet your needs. The reason that we can offer you fantastic prices is simple; a long history in the industry has enabled us to form strong links with commercial vehicle manufacturers, and the best refrigeration and insulation technicians in the business.

The best way to buy your refrigerated vehicle in Dagenham

At Glacier Vehicles we focus on your needs, and try and get the right vehicle rather than just selling the most expensive one. By first understanding exactly what your business does, and how your transportation network works, we can then understand which vehicle will best suit your needs. The focus with Glacier Vehicles is creating a long-term relationship with you so that you come back in the future whenever you have refrigerated vehicle requirements. In a business where top level delivery matters at all times, your business cannot afford to work with a company that doesn’t understand what it means to offer bespoke services.

Are you looking for a used refrigerated van in Dagenham? You won’t find a better place to buy a used fridge van than from our dealership. Temperature controlled vans have to fit different needs in the transport and logistics industry. Your operational requirements will be unique, and therefore you need a unique vehicle solution. Your used refrigerated vehicles must be fit for purpose, and therefore you need to take the utmost care when deciding. Use the Glacier knowledge in your vehicle refrigeration business in Dagenham Over 20 years of experience getting the right vehicle for each business has made Glacier Vehicles a leading light when it comes to choosing vans for your fleet. The experience of Glacier Vehicles, stemming from two decades of operation in the industry, has made us the leading name to count on for businesses looking for the very best solutions in the refrigerated van industry. Understanding your business is key to getting the right vehicle, and Glacier Vehicles has so much experience looking at operational requirements that we know what to do. By choosing poorly in something as small as the equipment in the van you can dramatically decrease the efficiency of your business. When something is overlooked in the decision making process when buying your refrigerated van it could prove costly in the long run, so avoid the mistakes by working with trusted professionals.

Get your Dagenham refrigerated vehicle a new conversion

The quality of conversion completed by Glacier Vehicles has meant we have a brilliant reputation in the transportation industry. The teams at Glacier have a massive amount of experience and can help you to understand the exact conversion that will fit your business, or the exact model in the showroom that will meet your needs. By converting your van with Glacier Vehicles you are guaranteeing yourself a van that ticks all the boxes in your operational requirements. By booking a demo with Glacier Vehicles you can better understand how a van can meet your operational requirements. Glacier Vehicles ensures that every vehicle arrives at the customer door in perfect condition, HPI checked and fully performance tested. 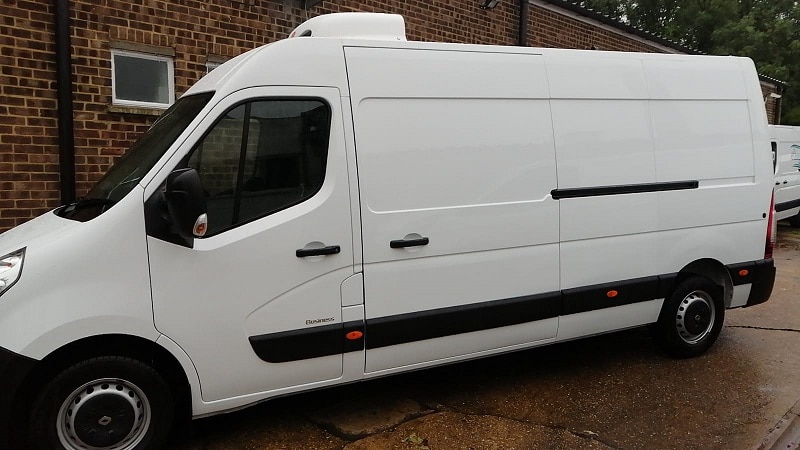 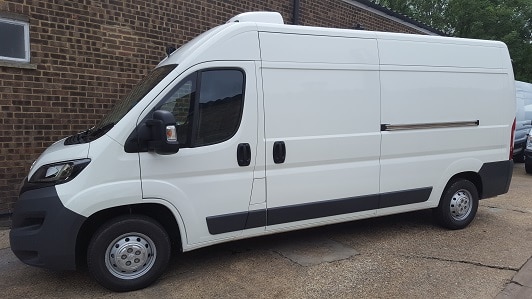 All the big refrigerated vehicle brand in Dagenham

We strive at all times to keep all of the big brands and all the best models of refrigerated van available in our showroom. You will find Mercedes, Nissan, Iveco, Fiat, Ford, Citroen, Peugeot, Toyota, Vauxhall, Renault and Volkswagen Refrigerated vans. We also have multiple different models of different brand bands, and frequently have over 20 Ford, Mercedes and Volkswagen vans. With so many options available it can be confusing knowing how to choose the right van, but we guide you to the right vehicle every time. Our refrigerated van experts in Dagenham are on hand ready to help you make the right choice.

Our goal is to help your business expand and we understand that different businesses have different levels of budget Whether you want to spend over £25,000 vehicle, or have a budget of £5000, will do our best to help you. Our affordable finance options provide you with the opportunity to spread the payments over several years.

We have customers at the centre of our business, and are always looking for ways to improve our service. Our business is progressive and we are always striving to offer the best possible service. Check out our customer testimonials to find out what people are saying about us. Very few companies have the positive testimonials that we have, and we are sure that they will provide you with some peace of mind, and confidence in our refrigerated transportation service. Whatever your business needs, whether it be a single van or a whole fleet, Glacier Vehicles are on the end of the phone to advise, guide you and get you the right refrigerated van in Dagenham.

Glacier Vehicles is proud to offer Refrigerated Vans for sale.
Dagenham is a District located in London in England.
Dagenham is well known for its many rivers and waterways including River Rom.
Located in London, Dagenham forms part of London Borough Of Barking And Dagenham in England.
Dagenham is located in London.
Dagenham is linkedd to county district shires including Creekmouth, Dagenham Dock, Rush Green, and Chadwell Heath.
District's including Dagenham are split are representated parliamentary constituencies such as Dagenham and Rainham (UK Parliament constituency), and Barking (UK Parliament constituency).
Over the years Dagenham has assimilated a number of settlements including Dagenham Dock, Rush Green, Castle Green, Creekmouth, Barking Riverside, Barking, and Thames View Estate.
Glacier Vehicles's Refrigerated Vans service area in the District of Dagenham also includes Becontree Heath, Chadwell Heath, and Becontree.
Other towns including Barking, London can be found within the District of Dagenham.
Dagenham comes under the Rm8rm10 postal code.
Elutec found within Dagenham are respected through out England and the United Kingdom.
Dagenham has a number of schools in the area including Dagenham Park Church of England School, and All Saints Catholic School.
Promoting cultural heritage in Dagenham is the Valence House Museum, and Eastbury Manor House.
Beam Valley Country Park, and Eastbrookend Country Park are popular with Dagenham locals and are known throughout England.
A13 road (England) are intrinsic to Dagenham transport infastructure.
Dagenham encompasses notable heritage assets including Dagenham wind turbines, St Margaret's Church, Cross Keys, Barking Abbey, and Eastbury Manor House.
Dagenham houses some well known churches including St Peter and St Paul, Dagenham Village Churchyard, and St Margaret's Church.
Becontree Hundred, and Romford Rural District are but a few of the important parts of the history of Dagenham.
The District of Dagenham is home to a number of businesses including Ford Dagenham.
Dagenham's shopping centers are famous and people flock to Barking Market